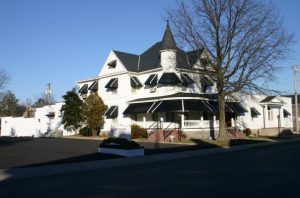 Bradford and Sons Funeral Home has been owned and operated since 1885.  Weekends please call us – we will meet on weekends as needed.

“A personal family crisis of long ago has resulted in 134 years of caring for the needs of others”, states Bradshaw & Sons Funeral Director and Owner Robert H. Bradshaw, Jr.

According to family history, Mr. Bradshaw relates, in 1885 a grief-stricken Aaron Bradshaw wanted to provide a fitting burial for his wife, Laura, who had died at the age of 26 from childbirth complications. However, the village of Ewell, as well as all of Smith Island was locked in the jaws of a severe freeze and he had no lumber for a coffin.

Fortunately, a waterman in nearby Tylerton had laid in some cedar cypress in preparation for building a new boat in the spring. The man agreed to let Aaron have some wood, and the grieving widower dragged his supplies over the ice to Ewell.

During that icy journey, Mr. Bradshaw had an idea that soon would take shape and continue to grow.

134 years and six generations later, the Bradshaw family continues to serve Smith and Tangier Islands, as well as Crisfield and most of Somerset County, Maryland.

Who would have thought that sad journey across the ice 134 years ago would have touched six generations and establish a tradition that would persevere into the Twenty-First Century?

Since 1885 and for six generations our family has been serving your family in your time of need. All of us here at Bradshaw’s strive every day to care for our community in their most trying time of grief.

Please contact us with any questions or concerns that you may have and we will be glad to assist you.